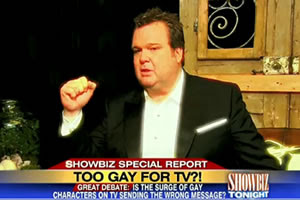 You read about it first here. Now CNN.com has removed a poll that asked viewers whether gay-inclusive television is “bad for society."

The poll, which appeared on the site Friday, was taken down after media watchdog the Gay & Lesbian Alliance Against Defamation (GLAAD) complained to the network. GLAAD also criticized the video report that accompanied the poll.
The story from the network's HLN's Showbiz Tonight titled Too Gay for TV begins with: “Too gay for TV? A brand new controversial battle is on today as more gay characters invade prime time television.”
In the report, Dan Gainor from the social conservative group Culture and Media Institute lashed out against the increasing number of gay characters on the small screen.
“It's bad for society to promote homosexuals, particularly a homosexual lifestyle and gay marriage,” Gainor said. “And that's what this is doing.”
GLAAD said the poll and report were troubling because they follow “an alarming trend of media outlets creating simplistic, predicable 'pro-gay/anti-gay' dualisms that do a great disservice to viewers who are seeking information on the diversity of opinion and experience within our community.”
Before the poll was removed, 56 percent of the 36,406 respondents said gay-inclusive TV was not “bad for society,” while 44 percent responded that it was detrimental. (Via On Top Magazine)
Posted by Brian Stout at 9/13/2010