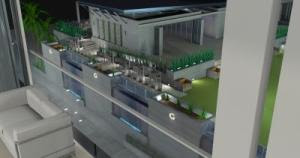 G Worldwide, which earlier this year announced plans to build five dedicated LGBT hotels in the US by 2012, just confirmed that its first location will be in Wilton Manors, Florida, just next to Fort Lauderdale.
The company intends to build a 700,000 square feet resort in the gay-friendly US town, which ranked third in the US overall for its percentage of gay residents as a proportion of total population in a 2004 study by research firm Urban Institute. The firm also intends to build resorts in New York, Las Vegas and Palm Springs.
Renderings of the first G Worldwide "luxury lifestyle resort" on its new website show a clean, futuristic concept with a poolside bar and sun loungers, a roof deck and extensive glass walling.
The company is now embarking on a nationwide tour of gay pride festivals to raise awareness of its brand, presenting a taste of the "G Experience" at pride parades in Fire Island, Provincetown, New Jersey, Washington DC, Boston, Philadelphia, and New York.
This summer, the company is set to announce its location in New York City, where it will compete with The Out NYC, the city's first "heterofriendly" hotel which is scheduled to open in 2011.
Posted by Brian Stout at 6/10/2010

Email ThisBlogThis!Share to TwitterShare to FacebookShare to Pinterest
Labels: travel