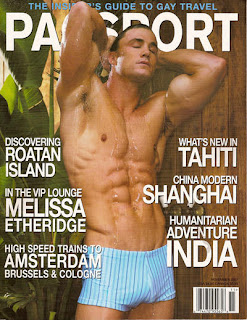 2009 Wasn't a good year for LGBT print publications. The Advocate announced it will be reduced to an insert in OUT magazine. The Washington Blade, Houston Voice and The Southern Voice all folded (though efforts have been underway to replace them- most notably the DC Agenda). And Spain's popular LGBT magazine Zero called it quits.

But Passport, the "hetero-friendly gay travel magazine," seems to be doing everything right.

Passport’s advertising revenue increased an impressive 32% in 2009, with Convention & Visitor Bureaus and tourist boards accounting for the largest growth in advertising expenditures in the magazine.

“The success of Passport can be attributed to several factors,” says Don Tuthill, publisher. “Our top priority has always been to provide high quality editorial content. Passport serves a market that demands information, rather than self-serving promotion.”

In serving the LGBT marketplace, Passport has carved a niche in a highly lucrative and brand-aware demographic. According to a recent survey conducted by Harris Interactive in partnership with Witteck-Combs Communications, average summer travel spending among LGBT Adults was $2,383 per person vs. $1,569 for heterosexuals. And, they are extremely loyal to advertisers who reach out to them.

“Over the years, advertisers have realized the value of the LGBT market,” adds Tuthill. “Our mission has always been to provide an editorial environment that caters to the needs of readers and advertisers alike.”

In addition to a stunning increase in advertising revenue, Passport has seen a 17% increase in single-copy sales at bookstores and a 2% gain in paid subscriptions. Passport is also available at many major hotels, airports and tourist bureaus throughout the world.