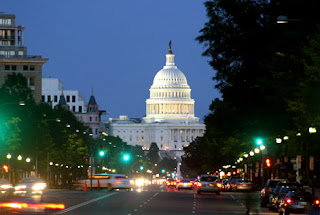 The D.C. Council today voted overwhelmingly for the final time to legalize same-sex marriage in Washington D.C., with two council members opposing. "This legislation is an important and historic step towards equal dignity, equal respect and equal rights for same-sex couples here in our nation's capital, which also preserves the right of clergy and congregations to adhere to their faiths," said Human Rights Campaign President Joe Solmonese.

The legislation passed today would allow same-sex couples to be married in D.C., along with five other states, but not require clergy or religious organizations to provide services, accommodations, or facilities for the services.

The clear majority vote was not a surprise to oberservers who anticipated the bill's easy passage today. The night before, Councilmen Harry Thomas and David Catania addressed a rally of about 350 supporters at the Kennedy Recreation Center in Washington D.C.

Catania, one of two openly gay council members who first introduced the legislation, asked supporters not to hold the two opposing votes against Councilman Marion Barry and Councilwoman Yvette Alexander, and said that their "no" votes respected the wishes of their constituencies.

The D.C. measure, which first passed Dec. 1, by the same wide 11-2 margin, reinforces the nationwide trend towards gay marriage in legislatures and at the courthouse even though advocates of same-sex marriage are continuing to falter whenever the issue is put directly to a public vote.

The historic legislation faces a series of hurdles before gays can officially tie the knot in the nation's capital.