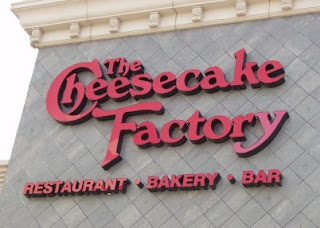 (AP): National restaurant chain The Cheesecake Factory Inc. has agreed to pay $345,000 to settle a federal lawsuit alleging it let some male employees sexually harass other male workers in suburban Phoenix.The settlement announced Tuesday by the U.S. Equal Employment Opportunity Commission includes a requirement that the company train its employees and managers about sexual harassment.

The EEOC lawsuit alleged company managers knew about repeated sexual assaults against six male servers by a group of male kitchen staffers at a restaurant in Chandler, Ariz., but did not intervene. The EEOC says the company denied the allegations.

Buzz around the blogs seems to indicate that this Arizona neighborhood is notorious for this kind of stuff.

The Cheesecake Factory released this statement in response to the initial allegations:

The Cheesecake Factory is aware that the Equal Employment Opportunity Commission (EEOC) filed a complaint in the U.S. District Court for the District of Arizona alleging unlawful employment practices at one of our restaurants... Our company is a responsible, Equal Opportunity Employer and is committed to maintaining a positive, productive and professional work environment for every employee. We believe all our staff members should be treated with dignity and respect, and we follow federal mandates in regard to related employment training and practices. The company has tremendous pride in the quality and diversity of its work force.