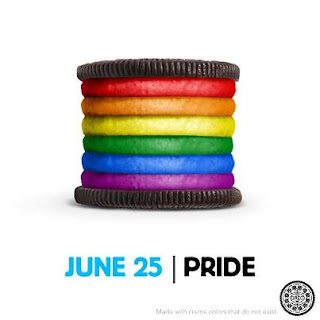 Last week, marketers at Kraft decided to support the LGBT community’s pride month by posting this image on the Oreo Facebook page. That move got more reaction than they anticipated: 285,000 likes and 56,000 comments - and that was for the post alone. The Oreo Facebook page now has 27 million likes.

Why is Oreo enjoying so much of a reward for such a simple (and free) act? They took a risk. They didn’t just put out a message saying they were supportive - they acted boldly by changing the color of their iconic product, which is in fact the symbol of their brand. This is something you rarely see from traditional brands, but when you do see it, you remember it. Like when Coke made their cans white in support of the polar bears, or when Ford made its logo green to launch the Escape Hybrid in the 2006 Super Bowl.

Of course, the move didn’t come without controversy. They did this on their mainstream Facebook page, not through LGBT-exclusive channels. This meant they were open to criticism from those against LGBT people, and the criticism sure did come - from individual comments to the large organizations leading the anti-gay industry. But with more criticism came more support, participation, and media coverage. An instant major uptick in awareness that couldn’t have even been achieved through mainstream media channels. And the product is apparently flying off the shelves. Why? Because a bold act beats cheap talk any day, with the LGBT community or any audience. By the way, Kraft responded well by issuing this statement:

"We are excited to illustrate what is making history today in a fun and playful way. Kraft Foods has a proud history of celebrating diversity and inclusiveness. We feel the OREO ad is a fun reflection of our values. There has been a lot of buzz about the image, and it shows how relevant OREO is to people even after 100 years.” - Basil Maglaris, Kraft director of corporate affairs.

So what’s next? I say launch special edition, rainbow Oreos for sale during next year’s pride month. It worked wonders for Absolut when they launched their rainbow bottle of vodka. And besides, pride has become an event not just for LGBT people. This year’s parade in Chicago drew a crowd of almost a million. As marketers become more comfortable boldly supporting the LGBT community, they’ll ultimately benefit from a much wider support halo then they anticipate. Like Kraft, they just have to be willing to suck it up and take some criticism along the way.