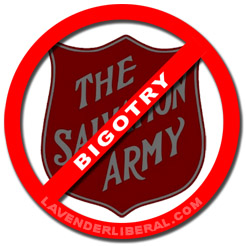 I thought this was a good article worth sharing by Joseph Erbentraut at the Windy City Times. In addition to what's mentioned here, it's widely known that The Salvation Army refuses to provide many of its services to openly gay people and gay couples. So please think twice about who you're really donating to this season, especially when Howard Brown right around the corner so desperately needs the help.
While the Salvation Army's stance on homosexuality may not be a new point of contention for many LGBT activists, recent reports of a drastic drop-off in donations to the group's iconic Red Kettle Campaign in the Chicago area have elicited speculation that the group's anti-gay reputation may be putting a dent into its fundraising haul this holiday season. (Continue reading this Windy City Times story via the above link).