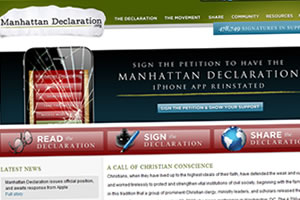 Apple has removed the controversial "Manhattan Declaration" app from its app store after more than 7,000 people signed a Change.org petition urging Apple to remove it. The free app included the 4,700 word document, which users were asked to electronically sign, and a four-question survey. One question asked, “Do you support same-sex relationships?” Users who answered “yes” were told that they had replied incorrectly.

In a statement to ABC News, Apple said the app was removed because “it violates our developer guidelines by being offensive to large groups of people.”
Responding to charges that the Manhattan Declaration is homophobic and anti-gay, the group said it doesn't believe that "disagreement" is "gay-bashing" and insists that the language it uses "to defend traditional marriage and the sanctity of human life...is civil, non-inflammatory, and respectful." The group also said it has written to Steve Jobs urging him to restore the app.
Posted by Brian Stout at 12/02/2010