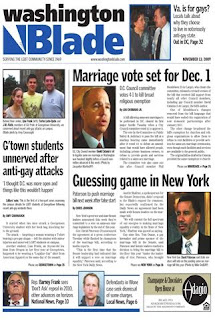 The Washington Blade, which served the capital's gay community for 40 years before it was closed by its bankrupt former parent last year, is returning to newsstands Friday. In a notice on its Website, Brown Naff Pitts Omnimedia, a company of former Blade employees who bought the paper's assets in February, said the paper will return under its old name.
Since the Blade's closing the company founded by Publisher Lynne Brown, Editor Kevin Naff, sales executive Brian Pitts and other former Blade employees had produced an online and print publication called DC Agenda.
"For more than 40 years the Washington Blade's commitment to excellence in journalism made it a weekly 'must read' for the LGBTQ community locally and even worldwide," Naff said in a statement. "This is the tradition we have tried to emulate with DC Agenda. We are thrilled that the Washington Blade is once again owned locally."
Posted by Brian Stout at 4/27/2010