27 People Cancelled Their Washington Post Subscriptions Over This Photo. So What? 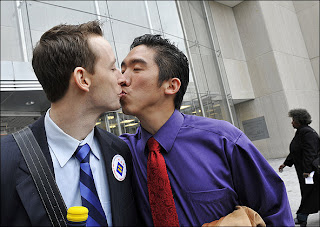 According to Gregg Fernandes, circulation VP at the Washington Post, 27 people have cancelled their subscriptions because of the above photo that ran on their front page last week on the historic day when marriage equality finally came to Washington, D.C.. So what? 27 people? I looked up their daily circulation, and it's 673,180.


Did the Post go too far? Of course not. The photo deserved to be in newspaper and on its Web site, and it warranted front-page display.
News photos capture reality. And the prominent display reflects the historic significance of what was occurring. The recent D.C. Council decision to approve same-sex marriage was the culmination of a decades-long gay rights fight for equality. Same-sex marriage is now legal in the District. The photo of Ames and Ariga kissing simply showed joy that would be exhibited by any couple planning to wed – especially a couple who previously had been denied the legal right to marry.
There was a time, after court-ordered integration, when readers complained about front-page photos of blacks mixing with whites. Today, photo images of same-sex couples capture the same reality of societal change.

Check out his full blog post here, and be sure to read the comments. Many people commented that they decided to subscribe to the post BECAUSE of the photo. Good for them, and good for the Post. In marketing, you always have to consider the ratio of who you lose vs. who you gain with any risk. In journalism and in life, doing the right thing in the name of history should always trump any effect on the bottom line.
Posted by Brian Stout at 3/10/2010