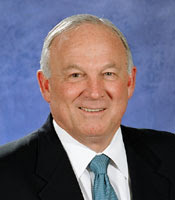 One of my favorite political figures in existence, Jerry Sanders (republican mayor of San Diego), testified earlier today in San Francisco on why he supports marriage equality. Sanders, whose daughter is a lesbian, said proposition 8 has the effect of saying, "we don't think that you folks have the same type of relationship or love each other as much, so we're not going to allow you to be married." While I don’t have a clip of Sanders’ testimony from today, here’s one of my favorite clips ever from a few years ago in which he announces to his constituents that he’s changed his mind in favor of marriage equality. We need more republicans (and democrats) like Sanders. In my book, he’s proof that civil rights doesn’t have to be a partisan issue.