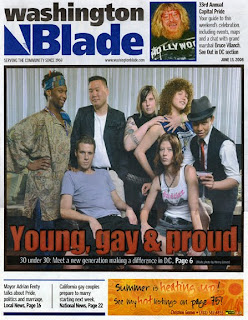 ATLANTA — The nation's largest publisher of newspapers serving the gay and lesbian community has shut down.

Laura Douglas-Brown, editor of Southern Voice newspaper in Atlanta, said she arrived at work Monday to find the locks changed and a note saying parent company Window Media LLC had closed down.

She said the company's other publications — including the Washington Blade, Houston Voice and South Florida Blade — were also being closed.

"From my understanding, there was just no more money to keep these companies running," she said in a telephone interview as she sat with her former employees outside their locked Atlanta office. "We had all been told that the companies would be sold. The fact that we were shut down was a complete shock."

The company's financial trouble stemmed from a number of factors. Besides an industrywide drop in advertising revenue amid the economic meltdown, mainstream publications are writing more about gay and lesbian issues, reducing dependency on niche publications such as Window Media's.

He said he'd be able to talk more about the closures later this week.

The company had been struggling financially since last year. The company's majority stockholder, New York City-based Avalon Equity Partners, was taken over by the U.S. Small Business Administration in August 2008, Douglas-Brown said.

Avalon owner David Unger said he was "not involved any more," then hung up the phone abruptly.

"Window Media long provided a very special outlet for the gay community to learn about itself way before there were a lot of other places to find that type of thing," said Michael Musto, an openly gay writer for the Village Voice in New York, which is owned by Village Voice Media Holdings. "This was the gay community writing about itself, and that's a voice we should never lose."