You May Now Move About The Cabin... And Kiss The Groom 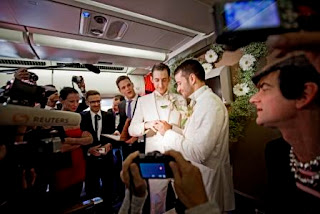 Two couples – one lesbian, one gay – have made history by becoming the first same-sex couples to simultaneously marry on board an aircraft.
Global carrier SAS Scandinavian Airlines hosted the ceremony on one of their Airbus A340s between Stockholm and New York on 6 December.
Although weddings have been performed on flights previously, this is considered to be the first dual same-sex wedding of its kind.
Robin Kamark, Chief Commercial Officer of SAS, said: “SAS is the national airline of three of the world’s most liberal and progressive countries in the world, especially when it comes to LGBT rights, so we feel this is a natural celebration of love.”
The chosen couples – Aleksandar Mijatovic and Shantu Bhattacherjee, from Germany, and lesbian couple Ewa Tomaszewicz and Gosia Rawińska, from Poland – received business class return flights to New York, three nights’ luxury accommodation in Manhattan, plus a second set of honeymoon flights to Los Angeles.
Posted by Brian Stout at 12/09/2010