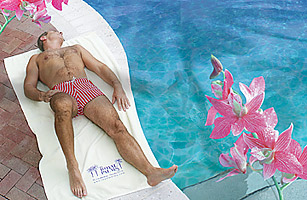 When the Lords South Beach Hotel opened last month in Miami, its brightly hued decor, trio of plunge pools and Absolut Vodka–partnered bar looked much like any other higher-end Miami resort. But the 53-room Art Deco confection, which is located a block from South Beach's main gay beach, is billing itself as the country's first large-scale, design-driven gay hotel. Not just gay-friendly, but gay through and through. The hotel worked with Out magazine to develop a Concierge App listing top local LGBT hot spots, asked Levi's to custom-design its gray and white jean uniforms, and is preparing to launch its own social network so guests can check one another out.
Although the Lords may be the first, it's not the only LGBT-focused hotel brand opening its doors in the U.S. In January, Fort Lauderdale's Royal Palms will reopen after expanding from a 12-room gay-friendly guesthouse to a 62-room boutique hotel. With a spa, café, bar and gym, Florida's Royal Palms Resort and Spa is marketing itself as North America's biggest "full-service" gay retreat, but it won't retain that title for long. Later in 2011, Manhattan will usher in the Out NYC, a massive, 90,000-sq.-ft. (8,400 sq m) "urban resort" close to Times Square.
From W to Wynn, Marriott to Kimpton, major hotel chains have been targeting lesbian and gay travelers for more than a decade. But now it's gay hoteliers' turn to court their own community. And why not? The LGBT travel market is worth an annual $63 billion in the U.S. alone, according to consumer-research firm Community Marketing Inc.
The industry trailblazer is Axel Hotels, a Spanish hospitality group with stylish, midrange LGBT-focused properties in Barcelona, Berlin and Buenos Aires. The chain is cheekily billed as "hetero-friendly," says Axel president Juan Julia, who notes that in the off-season, upward of 30% of the guests at its properties are straight. The five-year-old company is considering additional sites in London and Paris, but first it must tackle New York City — where an estimated 7 million LGBT tourists pump $16.4 billion into the city each year. Axel will manage the 127-room hotel for the Out NYC, whose other components include an 11,000-sq.-ft. (1,000 sq m) disco, upscale restaurant and men's spa.
Out NYC's managing partner, Ian Reisner, is confident the project will find an audience. "As with gay cruises, there is a certain kind of gay consumer who wants to travel among a like-minded crowd," he says. "New York has also lost many gay venues during the recession," Reisner adds, "so we have a huge number of travelers with a limited number of leisure spots."
"We've created a brand that is approachable to most travelers," Gorman says of the Lords, where intro rates begin at $159. "Our price point will be below the mainstream," echoes Reisner, who says the Out's rooms will start below $250. "We're not going after überupscale — it's not going to be the InterContinental."
In addition to attractive pricing, the Lords hopes to reel in customers by donating a portion of its revenues to LGBT charities. "The hotel is for guests who want to feel supported by a community," says Gorman, who is already planning additional Lords locations in Manhattan and West Hollywood, "while also supporting their community in return."
Read the full Time article here.
Posted by Brian Stout at 12/08/2010