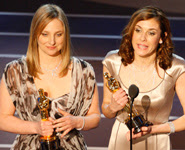 Cynthia Wade and Vanessa Roth picked up a win for best documentary short at last night's Oscars, for their film "Freeheld."

Haven't seen the film yet, but it appears to be a well-done picture highlighting one story of the millions out there of discrimination upheld through civil unions.

Should be interesting how the straight audiences interpret the film- whether they'll simply feel for this woman or encompass a broader understanding of how power works to box people into subordinate classes through institutions like civil unions.

Everyone should know that any candidate, especially either of the two democratic frontrunners, who promises to extend "full equality" to LGBT couples without the word "marriage" is making an empty promise and offering false hope to millions. "Marriage" is the single word, institution, and legal construct on which thousands of federal, state, local, financial, health, and other benefits are either granted or denied.

I would encourage any human rights supporter to stand strongly against civil unions. Because although I have not yet seen the movie or heard the whole story of Laurel Hester, I know that this woman lived, worked, and died for something much greater than a "separate and still unequal" slap in the face of a civil union.