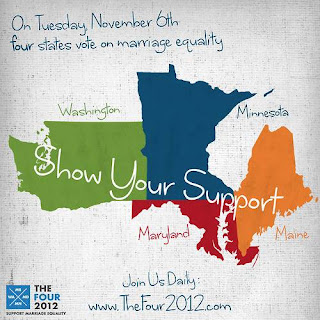 The Four 2012 is an online campaign to help support marriage equality in the four states it's on the ballot in November: Washington, Maine, Maryland, and Minnesota. It looks like they're encouraging user-generated content, but I don't see much. So why not consider contributing something? Just go the site and click submit.

Here's a word of encouragement from Maryland governor Martin O'Malley:


By the way, to support marriage equality, people should vote YES in Washington, Maine, and Maryland to legalize it. In Minnesota, the vote is just to enshrine the existing ban into the constitution, so people should vote NO there.
Posted by Brian Stout at 9/19/2012