The Muppets vs. Chick-fil-A 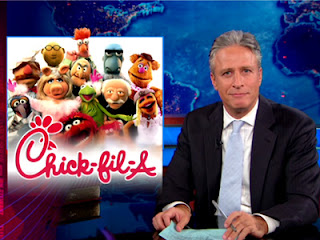 Chick-fil-A does so many things right – great food, outstanding service, iconic advertising... I hate that we have to boycott them. But it's an obligation to boycott any company that funds groups working to deny us our equal rights.

Recently, Chick-fil-A president Dan Cathy upset many when he told the Baptist Press his company was "Guilty as charged" in supporting the "biblical definition of the family." "We are married to our first wives," he said. Apparently only men work there?


“The Jim Henson Company has celebrated and embraced diversity and inclusiveness for over fifty years and we have notified Chick-Fil-A that we do not wish to partner with them on any future endeavors. Lisa Henson, our CEO is personally a strong supporter of gay marriage and has directed us to donate the payment we received from Chick-Fil-A to GLAAD."

Within days, the post generated over 6,000 comments and over 14,000 likes. To add fuel to the fire, it appears that executives at Chick-fil-A created a fake Facebook profile to advocate on the company's behalf.

The aftermath? International press coverage, cities around the country blocking the restaurant from entering their communities, and the complete loss of control of Chick-fil-A's Facebook page, which has become the central target for activism against the establishment.

To be fair, Cathy had every right to make his comments and the company can advocate for whatever definitions of marriage and family it believes in. But when it simultaneously funds groups working to legally restrict other definitions of marriage and family, it goes beyond just expressing an opinion. This is the future of human rights in this country that they're playing around with here, and that's why people are upset. Hopefully its a lesson learned: Don't attach your brand to the minority side of a hot button cultural/political issue – just stick with chicken.

As for the Jim Henson Company? They've suddenly emerged as a relevant brand. Who knows, maybe Kermit and Miss Piggy might just be the new faces of the LGBT rights movement.