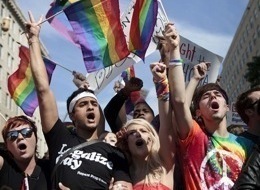 For weeks, supporters of Illinois' civil unions bill have been vocal and confident--and today the Illinois House of Representatives could finally vote on the measure. But unfortunately, the anti-gay industry has also been drumming up support in recent weeks.
A member of the Illinois Family Institute--which was recently deemed a hate group by the Southern Poverty Law Center--compared homosexual partners to polygamous and incestuous partners in an interview with the Associated Press Tuesday:
"It's not legitimate for the government to recognize the relationship of homosexual partners or polygamous partners or incestuous partners," said David E. Smith, executive director of the “Illinois Family Institute.”
Previously, the group has compared homosexuality to Nazism and has reportedly "made hundreds of thousands of automated calls to voters" in recent months urging voters to speak out against civil unions.
Civil unions would provide legal recognition of gay couples and give them some of the same benefits automatically available to married couples, including the right to visit a sick partner in the hospital and make decisions about their medical care.
Rep. Greg Harris, who sponsored the bill, called himself an "eternal optimist" and said the bill could get a floor debate on Tuesday or Wednesday.
Supporters told the Associated Press they're close to having the 60 votes needed to pass the measure in the House. If it passes there, backers think the Senate quickly would follow suit and Democratic Gov. Pat Quinn would sign it into law.
Read more at The Huffington Post.
Posted by Brian Stout at 11/30/2010