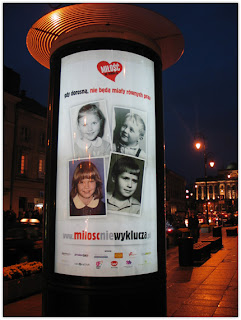 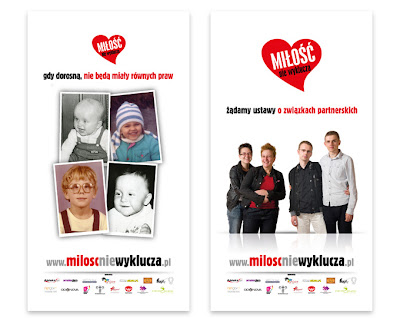 A new campaign aims to change the fact that Poland has no civil partnership law and provides no legal recognition to same-sex couples. Wojciech Szot, the coordinator of the campaign, wrote to me to tell me details:

Today, Poland is the biggest European Union Member State in which same-sex couples are invisible for the law. The law ensures no legal protection to them, does not regulate their situation, takes in fact no account of their existence.  This is unfair. This is an exclusion - in many areas of life.  Poland is also one of the very few European countries where the authorities have not taken up any measures whatsoever in this area. One of the aims of our campaign is to show that legal frameworks for same-sex relationships are a European civilisational standard and that social evolution in this area has not bypassed Poland. Our law, however, does not follow the reality in this respect, and the authorities refrain from any dialogue with the society at large and with our interest group.

“Love Does Not Exclude” is therefore an expression of this very pressing social need – the voice of those who are invisible to the law and ignored by politicians. For half a year now we’ve been hearing that a debate should be held in the Polish parliament, but will this happen before the parliamentary elections? Will the government and the opposition listen to their electorate?

The creation of – any – legal framework for same-sex couples in Poland is an increasingly urgent issue. We don’t want to keep pleading or asking. With the “Love Does Not Exclude” campaign we want to show that the time of demanding has come. We have the right to equality! We don’t want to be excluded any more! We demand civil partnerships law!

Another aim of our campaign is to show that a social action can be carried out without official grants or European funding. The background of our activities consists of voluntary work and donations – even the smallest ones – from our sponsors, both companies and private persons. We want to show that even the tiniest gestures count and that the fight for civil partnerships can be fought in all scales, large and small. The “Love Does Not Exclude” campaign, consisting of four elements (social networking on Facebook and Twitter, billboards, webpage, public event), is founded on its recipients – ordinary people who care for changing the Polish reality.

Please check out their Facebook page at - http://www.facebook.com/Miloscniewyklucza, and more information about the campaign can be found at:http://www.miloscniewyklucza.pl/about-the-campaign.html