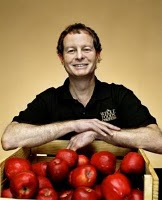 John Mackey, the Whole Foods co-founder and CEO who wrote an infuriating editorial in the Wall Street Journal a few months ago against Obama's healthcare plan, is finally stepping down. Mackey has held the position since 1978, and his departure comes as a welcome Christmas present to many of Whole Foods' left-leaning shareholders. CtW Investment Group, a shareholder activist group that works with union pension funds, said Mackey "attempted to capitalize on the brand reputation of Whole Foods to champion his personal political views but has instead deeply offended a key segment of Whole Foods consumer base."