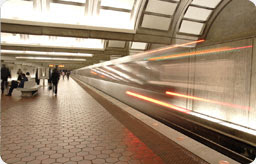 This is interesting. The LGBT rights group "Full Equality Now DC" has issued an action alert requesting that the Washington Metropolitan Area Transit Authority (WMATA) remove advertisements on the Metro paid for by an anti-marriage equality group called "Stand for Marriage DC." And in response, a handful of pro-LGBT equality leaders have opposed this censorship, saying "Free speech is not only for those whose beliefs we find acceptable." I've posted the action alert and the response below:

DC NewsA group called StandForMarriageDC is pushing to allow the people of DC to vote on LGBT citizens' rights. They've taken out advertisements on Metrobus buses in DC, forcing LGBT citizens to face discrimination when they go to work, their friends, or back to their families. As customers of the Washington Metropolitan Area Transit Authority (WMATA), we are demanding that these advertisements be taken down and that the LGBT riders of the Metrobus and Metrorail systems be treated with respect and dignity. To sign on in support, please email your name, phone number and email address to Colin at colin@fullequalitynowdc.org

Click Read More to read the draft of our letter to John B. Catoe, the General Manager of WMATA.

It has recently come to the attention of Full Equality Now DC that the Washington Metropolitan Area Transit Authority’s Metrobus system has been running an ad sponsored by a group called Stand for Marriage DC. The advertisement proposes that DC citizens vote on the fundamental right of same-sex couples to marry. The lesbian, gay, bisexual, and transgender (LGBT) citizens of the DC Metropolitan area—paying customers of WMATA—do not deserve to face discrimination when they get on the bus to go to work, to see friends, or to return home to their families, which already face discrimination.

While we understand that WMATA allows politically-oriented groups to purchase advertising on its transit system, this advertisement is not merely political. The specific request of this advertisement is that one specific group of citizens have their right to basic equality under law submitted to a vote. While other advertisements may address controversial issues, this advertisement specifically targets citizens on the basis of sexual orientation, in direct opposition to both common decency and the standards of non-discrimination in WMATA’s own policies.

The bus is a particularly painful place for these advertisements to be located, as they cannot be avoided. Because of these advertisements, countless LGBT citizens are forced to stare down discrimination as they board the bus to go somewhere or are even passed by an advertisement on the street. The irony is that public buses were the birthplace of another struggle for equality under law not too long ago. For LGBT citizens to have to experience discriminatory messages as they go about their daily life is unacceptable and must be stopped. For this reason, we demand that WMATA remove all advertisements posted by Stand for Marriage DC as soon as is possible.

We make no request that WMATA make any statement on the struggle for marriage equality, nor do we seek to force any individual office holders to do the same. However, we are citizens of this city, and customers of Metrobus, and we do not deserve to face this message when we ride the bus. We appreciate your understanding and look forward to your reply. Thank you in advance for your help on this issue.

It has come to our attention that the group Full Equality Now DC has launched an effort to persuade you to ban advertisements on Metrobuses or Metrorail by the group StandForMarriageDC opposing civil marriage equality for same-sex couples. (See the action alert from Full Equality Now DC, copied below.)

As supporters of civil marriage equality, we also embrace the principle of free speech enshrined in the First Amendment to the U.S. Constitution, which makes our own advocacy possible. Indeed, the then-named Gay Activists Alliance thirty years ago won a court battle against WMATA for the right to place educational posters in Metrobuses with the message, “Someone In Your Life Is Gay.” WMATA is a quasi-governmental body and is thus subject to the First Amendment. We, the undersigned, therefore urge you to reject the misguided censorship advocated by Full Equality Now DC.

Thank you for resisting pressures to favor or disfavor particular viewpoints, from whatever political direction they may come.