Anti-"That's So Gay" campaign was a huge success; Now onto round two 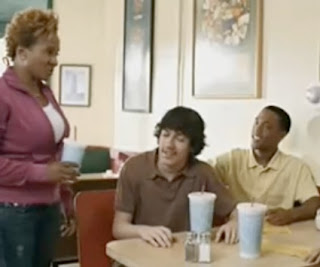 After a remarkably successful first year of the "Think Before You Speak" campaign that accompanied significant shifts in teenage attitude toward the phrase 'that's so gay,' the Ad Council and GLSEN, the Gay, Lesbian and Straight Education Network, today launched a much harder-hitting second phase that will focus more directly on the consequences of anti-gay language, as covered in The New York Times' Media Decoder blog on Wednesday.

The second phase of the campaign features a variety of provocative banner ads as well as other new thought-provoking online materials. All are made available to download and share at ThinkB4YouSpeak.com. While in the same vein as the campaign's award-winning TV PSAs starring Hilary Duff and Wanda Sykes, the new web-based materials challenge teens to think about the impact their language has on others. One of the banner ads recalls the story of Carl Joseph Walker-Hoover, an 11-year-old from Springfield, Mass., who took his life in April after enduring constant bullying at school.

Sirdeaner Walker, who has become a GLSEN spokesperson in the wake of her son Carl's death in April, said, "I am proud to work with GLSEN to raise awareness about an issue that has had such a profound impact on me and my family." Classmates bullied and harassed Carl, calling him "gay" and "fag," among other slurs, despite the fact Carl did not identify as gay. One of the new banner ads displays the phrase "Who are you calling a fag?" When users scroll over the ad, they are confronted with Carl's story.


"I hope Carl's story will help young people realize the impact their hurtful words can have on their peers so that no child will ever feel like the only choice they have is to take their own life," said Walker, who has also testified on Capitol Hill in favor of the Safe Schools Improvement Act, a federal anti-bullying bill. "Research shows that a significantly higher percentage of young people are choosing to think before they speak," GLSEN Executive Director Eliza Byard said. "Now we are going to challenge teenagers once again by asking them not just to think about what they are saying, but to consider the effects anti-gay language has on young people like Carl Joseph Walker-Hoover."


This new phase of work seeks to capitalize on the campaign's viral success by allowing Internet users to embed "Think Before You Speak" materials on their web and social media sites. In addition to banner ads, materials include a badge that tracks the occurrence of common LGBT slurs -- in real time - on the popular micro-blogging site Twitter. A polling tool has also been developed for bloggers to easily feature on their sites. Poll questions use timely events to encourage thought and discussion on the subject of how anti-gay language is used.


According to the Ad Council, high recognition of the "Think Before You Speak" campaign among teens (41% of teens aged 13-16 nationwide reporting that they have seen or heard at least one PSA) has translated into significant shifts in key attitudes and behaviors regarding the use of anti-LGBT (lesbian, gay, bisexual and transgender) slurs like "that's so gay." For instance, findings from a recent survey conducted by the Ad Council in 2008 and 2009 of teens aged 13-16 suggest that a higher percentage of teens in 2009 think that people should not say "that's so gay" for any reason (38% in 2009 vs. 28% in 2008) and a higher percentage also report "never" saying "that's so gay" when something is stupid or uncool (28% in 2009 vs. 18% in 2008).


These are significant gains in one year given how entrenched the phrase is in teen vernacular. Nearly every LGBT youth surveyed in GLSEN's 2007 National School Climate Survey (99.2%) had heard the phrase used at least rarely, and 90.2% had heard the phrased used frequently or often. "In the Ad Council's nearly 70-year history of creating campaigns to raise awareness and change public opinion and attitudes, we don't often see shifts of this magnitude in just over a year," said Peggy Conlon, president and CEO of the Ad Council. "We are looking forward to building on this success with a new series of PSAs and online tools that will help to further raise awareness and engage teens online."


To date, the "Think Before You Speak" campaign, the Ad Council's first-ever LGBT-themed campaign, has received significant PSA placement and media coverage, combining for more than $9 million worth of media exposure for the campaign's message since its launch in October 2008.

"The 'Think Before You Speak' campaign has started an important conversation among young people," Byard said. "While we still have a long way to go before widespread use of anti-LGBT language becomes a thing of the past, hopefully this campaign will force more and more people to confront the real consequences of the words they use."