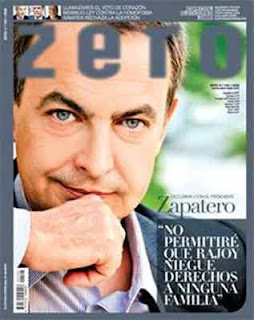 Even more bad news for print after last week's announcement that three LGBT newspapers in the U.S. were shutting down. Zero magazine, a glossy publication aimed at the gay and lesbian market in Spain, is to close after the publication of the 120th and last edition. This is quite unfortunate considering that Spain has made so many positive steps in the right direction in advancing LGBT rights recently.
The magazine’s editor, Miguel Ángel López, has been searching for funding for some months, but has now admitted that Zero will become another victim of the recession. He told 20minutos that the last edition, number 120, would be hitting the streets, but that it will be the last. The business filed for bankruptcy on the 6th of this month after income from advertising fell by 60%.
It’s the end of 12 years of publications which saw a whole host of personalities interviewed and placed on the front page, including Mayor of Madrid, Alberto Ruiz-Gallardón and the Prime Minister, José Luis Rodríguez Zapatero.