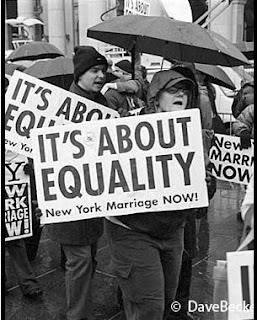 New York's Democratic-controlled State Assembly passed a bill legalizing same-sex marriage back in May, but the proposed legislation faces a tougher battle in the Senate, where the party has a slim majority. Despite this, it's on their agenda for today.

Governor David Paterson, a longtime supporter of equal civil marriage rights, has urged the upper chamber to pass the bill and vowed to sign it into law.

New York is one of the most politically liberal states in the nation, but it is also home to large numbers of Catholics and African-Americans, many of whom oppose equal access to marriage licenses.

Read more in this article (Reuters)


Update: Looks like the vote won't happen today after all. Rumor has it that perhaps it will be on Friday.