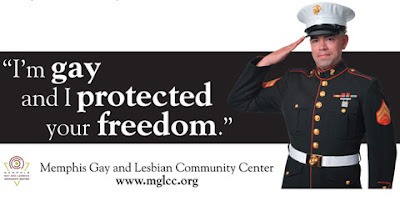 The billboard was part of a campaign for National Coming Out Day, which takes place annually on October 11. The campaign's purpose is to promote understanding of issues affecting the gay, lesbian, bisexual and transgendered community in the Mid-South.

The billboard located at Poplar and High near Downtown Memphis pictured a marine and read,"I'm gay and I protected your freedom."

Police have not said whether there are suspects in custody.

"I know that they intended to silence us with hate. However, we are choosing to unite and come over that with a stronger voice, and a message that we are here - and we deserve equality as well as everyone else," she said.

MGLCC plans to hold an event later this week to rally against the vandalism.

Read the whole story and watch the video clip on wmctv.com
Posted by Brian Stout at 9/29/2009